BAG at the Klingenmuseum Solingen

The Broadsword Academy Germany got the chance to visit the German Blademuseum in Solingen (www.klingenmuseum.de) for a private Sword handling session. Our friend Dr. Sixt Wetzler, co-director of the museum, kindly invited us to head north to the old bladesmith town and check out some of their Basket-hilted Swords in the arsenal. These items are not in the public display and we were honored not only to see, feel, measure, weight and photograph them, but also to use them (carefully of course, although the condition of every sword was very good). The idea of such a session came up at the 1. St. Martin Conference last year and finally we made an appointment. Sixt already told me at a Dog Brothers event a week before, that he hand-picked very nice items for us. So we were amazed of course.

We met at our Dojo in the early morning and drove to the Museum. Dr. Weltzer´s collague Wolfgang Peter-Michel welcomed us, because our friend Sixt unfortunately could not attend due to a visit in Russia. But Wolfgang was a perfect host and guided us to the seperate show room with a wonderfull collection of various basket-hilted swords and some additional surprises.

The museum presented five Venetian Schiavona, all with thumb-rings and the possibility to put the index finger over the leather-covered ricasso and the cross for better weapon control. These were real beautys and we realized, that although similar to the Highland Broadsword, the use of this weapon has more in common with the Sidesword like the Bolognese School taught it. Moulinets can be done, but not as much and free as with the Broadsword, because the cat-head shaped pommel cuts sharp into the palm. So cutting and thrusting with passing steps worked fine and especially thrusts and reverse cuts could be done very well with this kind of weapon. One of the Schiavona was a bit too top heavy, but all others were well balanced. Two had blades with a distal taper optimized for thrusting and cutting, one had a very thin and flat blade, which was surprisingly flexible, so indeed a nasty cutter. 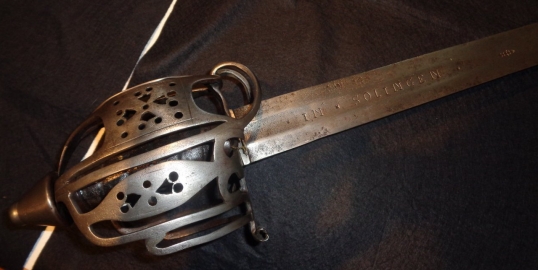 Of course we were amazed to see four Highland Broadswords in the showroom. One Victorian example, which was surprisingly well balanced and quickly became one of our favourites. The best example however was a Broasdword with a blade made in Solingen, propably 18th century. It had a bit tight and dented brass-Baskethilt, but the balance was perfect. Another fine example was a Cavalry Broadsword with a Glasgow-hilt from ca. 1750. It was well-balanced, overall pretty long and the blade was made in Solingen too. It was machete-like: thin and flexible and still very sharp. Even in the strength section of the blade near the hilt it was pretty flexible, so to parry with it against a stiffer blade, could possibly be difficult. However in quickness and especially to be used with a Targe, this sword was great. The fourth Broadsword was a monster! Very heavy in the broad and thick blade, which seemed to have been a bit shortened and was slightly curved. This sword was impossible to be used as a solo weapon without a targe and would require a lot of physical strength. In the Regimental style, it could not be used properly. Using Thomas Page´s Equilibrio however made it easier to whield it, but still we can assume this was for some fighter with lot of strength. The blade was made in 1600 and had the signature “C.C. Thomas”. 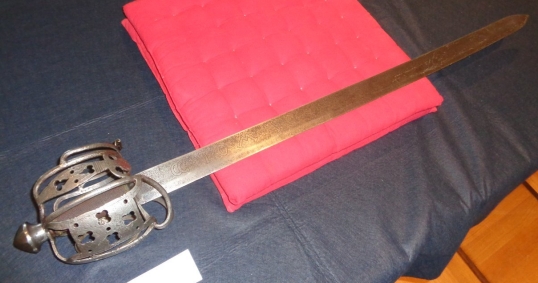 Some other weapons displayed for us were a really well-balanced German Backsword from ca. 1650 and a less well-balanced german 16th century Basket-Hilted Broadsword. Next to them there was also a Austrian M1769 Pallasch (or a M1796 British Heavy Cavalry Sword), a wonderfull German Sabre and an English Hunting Hanger. Two more exotic weapons were an indian Tulwar and a Pata, an indian gauntlet-sword which was pretty cool.

We weigthed, photographed and of course handled all weapons. After the session, we took a Coffee break in the Museum before wandering through the regular public collection with its wonderfull Bronze and Iron Age weapons, medieval swords, Longswords, Twohanders, Sideswords, Rapiers, Sabres, Hunting Swords, Knifes and much more.

In the afternoon, we had some beer and food at the marketplace in a very nice Coffehouse enjoying the summer sun over Solingen. After a quick walk through the beautiful Old Town, we headed back to our home.

We like to thank Dr. Wetzler and the Klingenmuseum again for this splendid day and also his collague Wolfgang Peter-Michel for guiding us through the collection. This was a great opportunity and we learned a lot through handling these originals.

For the complete photo collection, please visit our photoalbum: