Every historical swordfighter not only struggles with interpreting of the old manuals, but also with finding the right equipment. Luckily the rise of HEMA introduced some great suppliers for gear such as masks, jackets and gloves. But finding the right weapon of choice is still a tricky nut. 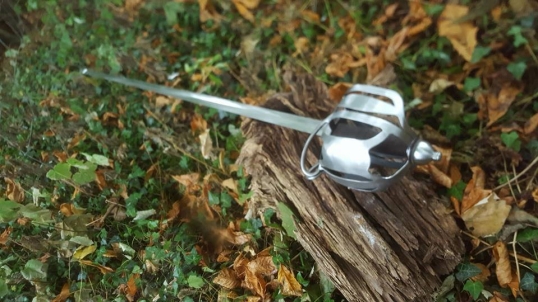 The Angelo Prototype Broadsword made by Chris Adams of Balefire Blades

When it comes to steel training swords, we Highland broadsword enthusiasts don’t have as big a selection to choose from as longsword fencers, for example. The basket hilt often makes the weapon more expensive than others, even in their most basic design. So much the better, then, when you can help to develop a prototype broadsword together with an excellent swordsmith.

Chris Adams is from southern England, where he is now working. His workshop, Balefire Blades is in Uckfield – about half an hour from Brighton by car. It is surrounded by fields and woods and hills, which is just the right atmosphere for Chris – not to mention many pubs.

Chris discovered a passion for historical fencing at the Sussex Sword Academy, where he trained in Highland broadsword under the guidance of Lyell Drummond. Chris then began studying swordmaking under Marco Danelli in 2013. After graduating his apprenticeship, his main work became making entry level swords and blades for all of Marco’s swords. Since starting his own business in early 2018, the main challenges have been confidence and organisation. Chris amassed all the requisite skills after making many swords and thousands of blades under Marco. Yet his goal is perfection, so knowing when a sword is “finished” can be a struggle, and a journey of constant improvement.

The idea for a Highland broadsword trainer first came up on the beautiful island of Malta in 2015, when I met Chris for the first time. We not only had an amazing exchange with steel on the fortifications of Fort St. Angelo (Video), but we also chatted a lot about broadswords, sabres and Bavarian haxn. When I bluntly asked if he could make a training Broadsword for me, he said he was flattered – but as he was still an apprentice he’s have to wait.

Time went by and Chris kept his word. In early 2018 he approached me to assist him in developing a sturdy, well balanced Highland broadsword prototype. It was to be based on extant originals yet designed with an affordable price in mind. No question, I was thrilled – and so we exchanged ideas and pictures. Luckily my fencing group had the opportunity to visit the arsenal of the German Blade Museum in Solingen and to photograph, measure, weigh and use some original Highland broadswords (as well as some other basket-hilted swords). I was able to describe my impressions to Chris and send him photos of the weapons. The result of this cooperation is the “Angelo” prototype, named for the famous British fencing master whose manual is one of the major texts that the Cateran Society uses to train in Highland broadsword. Chris sent the prototype to me, and I was amazed from the first moment I unpacked the weapon.

The design is based on regimental broadswords of the 1750s-1770s. These were simple military arsenal weapons, but designed to be used in battle. Chris was able to preserve the spirit of these weapons just perfectly. The basket hilt is sturdy and offers good protection. After some trial runs, we spoke about minor improvements such as additional bars for more protection on the top and bottom of the hilt, as well as hardening the steel. However, even in its prototype form the design works well.

The blade is narrower than older clan-period broadswords, taking inspiration from regimental backswords (although double-edged). We decided to keep it light and quick, as most Highland broadsword students start with what we call the Regimental Style. This focuses on the military broadsword as found in the second half of the 18th Century until the Napoleonic Era. Keeping in mind the swift actions called for my masters such as Angelo, Sinclair, Mathewson, Roworth and Taylor, the Angelo prototype should be suited for this style, making it an easy choice for new students. The blade has no fuller, but it’s flexible enough in the weak for thrusting and stiff enough for solid cuts and parries. For safety purposes, Chris created a blunt, swollen tip, but future models could also have a flatter tip with a rubber cap, depending on personal taste. 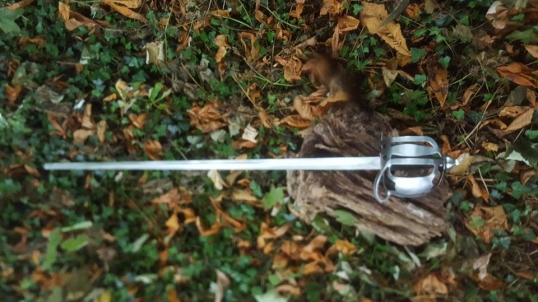 At the Broadsword Academy Germany we used the Angelo prototype in training for around two months. It took a hard beating, not only in drills, but also in several sparring bouts. These were mostly against broadswords made by Armourclass. Although the Armourclass was a bit lighter in the hand, its wobbly blade made it hard to parry the cuts of the Angelo, which was solid and unimpressed in its parries. The blade stiffness to flexibility ratio is very, very good. The blunt edge suffered some minor scratches and dents, though nothing outside the bounds of what any fencing weapon would face.

The basket hilt proved robust enough, especially the slooping quillons. Only the bars at the very back of the hilt gained deeper dents, which could be bent back easily. However, as written before, Chris’s adapted model will feature a hardened steel basket, solving this issue.

The wooden grip has a simple but comfortable design. It is wrapped with cord, which lies much better in the hand than many leather or fishskin grips I’ve tried, especially with gloves. Although custom grips may be available for those who want their weapons a bit more “shiny”, in my opinion this grip is perfect. It’s also comfortable for smaller hands. Very big hands may benefit from a slightly thicker grip and wider basket-hilt, but for me (186cm tall and of average weight, with average hands) I would say it’s perfect. In my opinion the PoB could be a tiny bit closer to the basket-hilt to make it even more accurately balanced (and it is already well balanced), but Chris and I have discussed some adjustments, which will improve the final model to the optimum.

So to sum it up: Chris did a great job making the Angelo prototype robust, wieldy and good (meaning authentic) looking. Even without the small changes in the works, the prototype is a very, very good broadsword trainer and I would have no trouble highly recommending it.

Grip and Basket-Hilt of the Angelo Prototype

Posted by bagermany in Uncategorized